The high potassium foods diet has been shown to reduce blood pressure, strokes, and cardiovascular disease. These foods have a high ratio of potassium to sodium and they produce an alkaline urine. This diet can be obtained by increasing the potassium and/or decreasing the sodium in the diet. Emphasis for many years has been on reducing sodium, because the greatest amount of research has been done on sodium. If potassium intake remains the same, less sodium should result in a higher potassium sodium ratio, and should result in less cardiovascular disease. 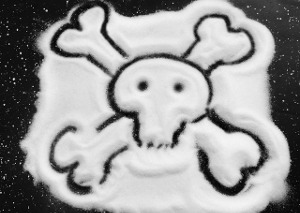 Such publications claiming that less sodium is not safe generally say there is a J-shaped or U-shaped curve to mortality and sodium consumption. They claim there is increased risk of cardiovascular disease and death at the more restricted levels of less sodium consumption. They often make this claim broadly, not saying that it may be true only in limited circumstances. Such claims are highly misleading, making healthy people afraid to lower their sodium intake to the recommended levels.

However the problems with such claims are many. The broad health claim that less sodium is dangerous for a healthy person is totally unfounded. And it may be dubious for most higher-risk people unless they have very specific circumstances. The publications that these claims are based on are filled with flaws.

Of all the flaws with these publications, there is one major, universal flaw that stands out. All of the studies were based on secondary analyses of studies designed for a purpose other than determining the relationship of sodium intake to subsequent cardiovascular disease.

The problem with using studies designed for another purpose is that important data needed will not be present. Telmisartan, for example, produces increased sodium excretion in the urine (2). Although more excretion occurs during the first few days, it continues long term. The urinary sodium will certainly be affected by the medication. With spot urine collections, the sodium excreted will vary according to when the urine is collected. It varies throughout the day, and from day to day normally in people not on medication. And it varies according to the length of time since the medication was taken. Almost all of these secondary studies include primary studies that used spot urine collections.

Using data from these studies, the authors concluded in their abstract that the “association between estimated sodium excretion and CV events was J-shaped.” Thus they indicate that the association applies to everyone. In the body of the paper they add a little more specificity, saying that this association is true for “those at increased CV risk.” But even this may not be true, since it really only applies to those on these medications. And only if the spot urine collections accurately reflect sodium balance, which they do not. The inaccuracy of spot urine collections for sodium and potassium will be discussed in a future post.

The study to be discussed today does not have such flaws. It was designed specifically to determine the relationship of cardiovascular disease to sodium and potassium as part of a nutritional supplement intervention and lifestyle intervention. It is a follow-up report (3) on the Trials of Hypertension Prevention (TOHP) study.

This report cites the 10 year and 15 year follow-up of the TOHP study. They combined the data from the two phases. The results showed that the participants had an average sodium excretion of 3630 mg of sodium in 24 hours. Only 10% of the participants in this study had less than 2300 mg excreted in 24 hours. And 1.4% of participants excreted less than 1500 mg a day. The researchers sent questionnaires to the participants. Medical records of any who indicated events related to cardiovascular disease or who died were examined.

The study found that compared to the risk of those with a consumption of 3600-4800 milligrams of sodium a day those who consumed less sodium than 2300 mg had a 32% lower cardiovascular risk. The researchers plotted the sodium consumed against the hazard of having a cardiovascular event and found a continuous reduction in risk. The graph did not show any J or U-shaped curve. Rather, it showed a continuous reduction in risk as sodium excreted dropped from 10,000 mg/day to less than 1000 mg/day.

One of the problems with the studies finding increased risk is that they only did spot urine collections. Because there is a great deal of variability in sodium intake on any particular day there can be a great deal of inaccuracy with these. This problem was eliminated in the TOHP study. During the active study period of the TOHP study, the researchers collected 24 hour urine specimens. They collected urine samples 3 to 7 times over the study period. Additionally the first study lasted 18 months and the second study 2 to 3 years. This should give far more accurate measurements of average daily sodium and potassium intake than a single spot urine collection.