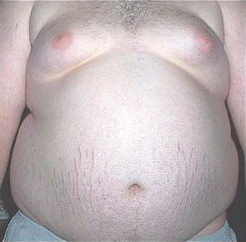 In the study discussed last week there was an association of microalbuminuria with increased sodium intake. In that study the researchers did not consider potassium intake. They only looked at sodium.

In the study to be discussed today (1) the researchers looked at both sodium and potassium in the diet, and additionally studied the sodium potassium ratio (the inverse of the potassium sodium ratio). They looked at a possible association of the ratio with Body Mass Index (BMI). They found that albuminuria was associated with a high sodium intake and a poor potassium sodium ratio in obese people, but not in normal or overweight people.

The researchers had over 19,000 subjects in the study. They did a cross-sectional study by dividing the subjects into groups according to certain characteristics. They did phone interviews to determine age, race, gender, education, household income, physical activity, current smoking status, alcohol consumption, self-rated health, prior diagnoses of hypertension and/or diabetes, prior heart attack and use of certain medications. They did home visits to measure height, weight, waist circumference, blood pressure, and to collect blood and urine samples, and to administer food frequency questionnaires.

Prior studies had shown an increase in cardiovascular disease as BMI increased. Other studies had shown that sodium had a worse effect on cardiovascular disease in obese individuals. These researchers wanted to find out if sodium's effect on albumin in the urine also was worse in obese individuals. So they divided the subjects according to BMI. They also divided the subjects according to the sodium potassium ratio of their diet.

For BMI, the researchers divided the subjects into 3 groups – normal weight, overweight and obese. This was based on prior studies showing that cardiovascular disease increases as BMI increases.

They also divided the subjects approximately equally into 5 groups according to their dietary sodium to potassium ratio. They determined the dietary ratio by calculating sodium intake and potassium intake from a food frequency questionnaire each participant filled out.

The researchers found associations of BMI with many of the characteristics studied. Black race, lower education, less income, poorer self-rated health, sedentary activity, dyslipidemia, hypertension and diabetes, and higher systolic and diastolic blood pressure levels were more common at a higher BMI. Smoking and alcohol consumption were less common at higher BMI. Sodium intake and the sodium potassium ratio were higher at higher BMI. Potassium intake and total energy intake did not differ by BMI.

After using the raw data for each BMI category, they used 4 adjusted models. In the first model they adjusted for age and total energy intake. The second model added adjustments for gender and race. The third included additional adjustments for education, income, smoking status, alcohol consumption, self-rated health, and physical activity. The fourth model additionally adjusted for hypertension, dyslipidemia, and diabetes.

But the researchers pointed out the limitations of their study. The limitations of the study were that it could not determine causality because the study had an observational cross sectional design. Also there were limitations because the researchers only took spot urine samples for albuminuria. Generally though, spot urines correlate well with 24 hour urine collections for albumin. Additionally, the researchers only used dietary recall rather than 24 hour urine collections to determine the sodium and potassium intake. Many studies of sodium and potassium have been done in this fashion, but the limitations, such as under-reporting of intake, are well known.

This study and last week's study are both early studies looking at how sodium damages the kidney. They are both preliminary types of studies. Not too much should be taken from them. It will be up to others to show the physical changes in the kidney from a poor potassium sodium ratio. This can be done in the same way it was done for hypertensive heart failure, discussed here.

However, it is known that a poor potassium to sodium ratio will affect the electric field across the cell membranes in all cells, including those of the kidney. Because of this it is not unreasonable to expect kidney damage related to a poor ratio. But all the steps leading to this damage have yet to be discovered. Basic science studies similar to those that have been done for hypertensive heart failure should be able to show those steps.
__________________
1. Association of dietary sodium and potassium intakes with albuminuria in normal-weight, overweight, and obese participants in the Reasons for Geographic and Racial Differences in Stroke (REGARDS) Study. Aaron KJ, Campbell RC, Judd SE, Sanders PW, Muntner P. Am J Clin Nutr. 2011 Oct;94(4):1071-8. doi: 10.3945/ajcn.111.013094. Epub 2011 Aug 31.