Beans are one of the high potassium foods, but they also have other characteristics that may add to their healthful effects. Fiber is one of the other main components felt to have a healthful effect. A recent study (1) sought to determine if the fiber in legumes could lower three of the main cardiovascular risk factors. The factors examined were total cholesterol, LDL, and triglycerides. The researchers studied these in both insulin resistant and non-resistant subjects. 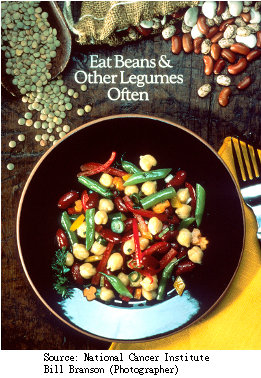 This was a small study that included 64 subjects. They studied the group for 2 four-week periods. They divided the main group into two smaller groups, one of which received a diet high in legumes and the other receiving the Healthy American diet. The legumes diet consisted of five different cooked beans with highly fermentable fiber. All meals were in a controlled setting. Dietitians measured any food that was not eaten.

The researchers did an exceptionally good job of controlling the diet during the experimental periods. Both groups received almost identical diets. Diets were adjusted so that there was no weight loss in either group or in any participants. The macronutrient breakdown was the same for both groups.

The difference was mainly in the fiber from beans. More than double the amount of fiber was consumed by those on the high legumes diet than those on the Healthy American diet. The researchers substituted beans for a similar type of food such as pasta or rice.

As with many of these types of studies, the researchers did not consider the effect of potassium. They also did not study blood pressure or other cardiac markers beyond the three mentioned. It would be likely that those on the high legumes diet had a higher potassium sodium ratio. Beans are among the highest ratio food group. The type of food they were substituted for in the examples given in the study would not have had as good a ratio. In fact, they probably would have had a fairly high sodium content.

Nonetheless, the study has several strengths. The high control of the diet and calorie count is very important. When someone loses weight they almost always reduce their total cholesterol, LDL and triglyceride levels. Because weight was unchanged, weight loss would not explain the changes. Fiber has been shown in other studies to also have desirable characteristics. And they were able to show that the beans did have an effect on total cholesterol and LDL. This may be because of the increased fiber, although there are other potential explanations, such as an increased potassium sodium ratio.

📂This entry was posted in High Potassium Foods